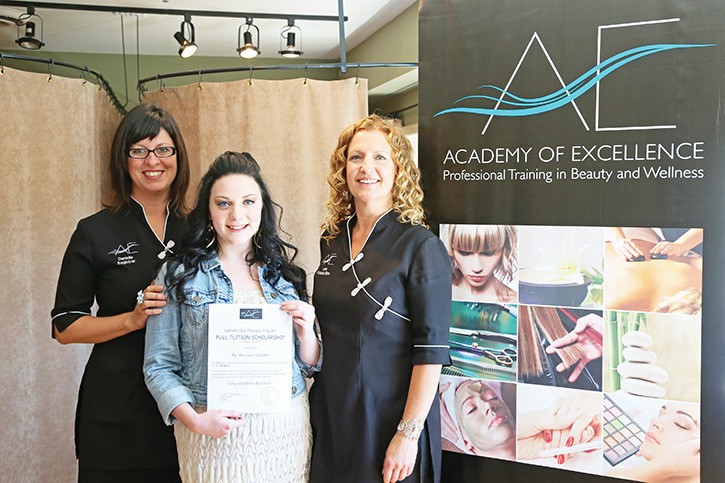 Bronwyn Stauffer was on stage, diploma in hand, at her high school graduation when she heard the news for the first time. The Grade 12 graduate of Edward Milne Community School in Sooke had just been awarded a scholarship to cover her entire tuition.

“My family is just going crazy and I was almost in tears,” she said. Her father videoed the whole thing and her mother? “She broke her belt when she found out,” Stauffer said.

She is the recipient of a $13,800 scholarship for the esthetics/spa therapy program at Colwood-based Academy of Excellence, the largest the company has ever awarded. The extensive 1,500-hour program teaches all aspects of tradition esthetics and advance spa therapy, with 30 per cent of the program spent in the classroom and 70 per cent in the spa. Students also get to sample, at least once, all of the treatments they are learning.

“This is the beginning of my career and I just can’t wait to get started,” Stauffer said. “I’ve heard nothing but amazing things about this school.”

Danielle St. Jacques, registrar of the Academy of Excellence, met with the future student on Wednesday to give her a tour of the facilities and formally begin the enrolment process so she can begin classes in September.

“We’ve never done anything like this before. We wanted to do something relevant to the excitement of our 50th,” St. Jacques said, adding they wanted to give back to the community that has supported them.

The scholarship was open to all local high school students, but Stauffer’s 17-page application describing her commitment and passion for the beauty industry well exceeded the requirements, St. Jacques said.  “She stood out as someone very deserving of the scholarship and we’re very excited to give it to her.”

Most of the Academy’s students are funded by student loans, St. Jacques said, and once they graduate they have six months before they have to start paying back their loans.

She is already looking to her future with plans of one day opening her own shop and looks forward to the business component of the program, which teaches the realities of starting a business.

“It still hasn’t hit me,” she said, after delivering a thank-you card to the school. “It’s such an honour.”